You are here: Home / boys & girls club / R’jn Returns to the Court

At Boys & Girls Club of Portland Metro, every Club member has something unique that stands out to Club staff. For one charismatic boy named R’jn, that gift happens to be the sport of basketball. His passion for the game was interrupted several years ago due to a bump in the road of life. Through the mentorship and guidance of Club staff, he was able to reignite his passion on the court. Through connections at our Clubs, his fire was further fueled by two well-known figures in the basketball arena: Jesse LeBeau and Matt Conboy.

R’jn’s journey really began three years ago, when he started experiencing pain and unexplained behaviors. Medical professionals from different fields couldn’t immediately identify what was wrong, and told the family that the symptoms were all in his head. The lack of belief, and ongoing pain, caused R’jn to become withdrawn and depressed.

After a year of tests and hospital visits, the family finally got a diagnosis: R’jn had Chiari malformation. This condition occurs when the skull is too small or misshapen and puts pressure on the brain that causes tissue to extend into the spinal canal. Surgery was necessary. While nerve-wracking for him and his family, the November 2017 surgery was a success.

Yet, as successful as his surgery was, R’jn still wasn’t able to continue playing basketball, which had been the love of his life before his symptoms began. He had been unable to play for a year already. A full recovery to return to sports would take another year. 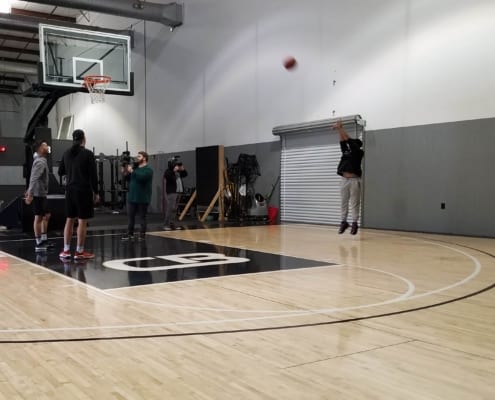 In 2018, that changed. His brother had been attending Boys & Girls of Portland Metro on a regular basis. When R’jn was eventually asked by his brother to tag along, he was somewhat hesitant to go. Even with the family’s frequent volunteering at the Inukai Family Club and within the Hillsboro community, his parents did not think the attention to Boys & Girls Club would last long.

But something ignited a spark in his heart again. R’jn was encouraged by mentors to pick up a ball again and play basketball. As soon as he was back dribbling and shooting hoops, his parents started to see his

confidence return, along with those smiles they had so dearly missed. He even jokingly told his mom, “I got too much BRAINS for my head.” Club staff encouraged him to continue to grow with his love of the game.

His passion for basketball was well known at the Club. So, when teen coach and basketball trickster Jesse LeBeau was coming to town for his Attitude is Everything Tour last fall, Club staff knew Jesse and R’jn would be the perfect match up. While shooting hoops at the Inukai Family Club in Hillsboro, where he can regularly be found, R’jn was surprised by Jesse, who showed him some tricks and took him out to see his decked out tour bus. The look of awe on R’jn’s face was priceless.

After a short ride, they arrived at Matt Conboy’s elite basketball training facility, where R’jn had an intense workout shooting hoops with Matt. Then, they had another surprise waiting for R’jn. As he tore open the envelope, he read aloud that he had been invited to join Team P.U.S.H., a youth travel basketball team. R’jn’s face lit up with a smile from ear to ear.

Through mentorship from Club staff and his passion for basketball, a year of amazing growth has culminated into R’jn receiving the once in a lifetime opportunity to join a travel basketball team. We would like to extend our heartfelt gratitude for Jesse and Matt taking the time to provide R’jn with experiences he will never forget. We at Boys & Girls Club of Portland Metro feel so grateful to witness R’jn’s journey come full circle and give back to a family that has given so much to our community.

Will you support our youth this holiday season?

2019 in Review from the Volunteer & Recruitment Coordinator
Scroll to top