You are here: Home / Annual Appeal / Will you support our youth this holiday season?

Will you support youth this holiday season?

Boys & Girls Clubs of Portland Metropolitan Area has been meeting the critical needs of underserved youth since 1946. Last year, we served over 6,400 youth, and it would not have been possible without the support of our families, staff, volunteers, donors and community members. Thank you!

Across our 10 Clubs, we provide life-changing services – hot meals and snacks, academic support, counseling services, teen workforce programs and more. Oregon has one of the lowest graduation rates in the United States, with 21% of teens not graduating high school. Yet 100% of our Clubs’ seniors graduated high school in 2019. We need our community’s support to keep this success going.

Over 6,400 youth need your help this winter. Here’s how you can give back this holiday season.

When you give back to the Clubs, you are giving youth in our community the building blocks for a Great Future. Thank you for investing in our youth!

Wishing you a wonderful holiday season, from all of us here at the Boys & Girls Clubs of Portland Metro. 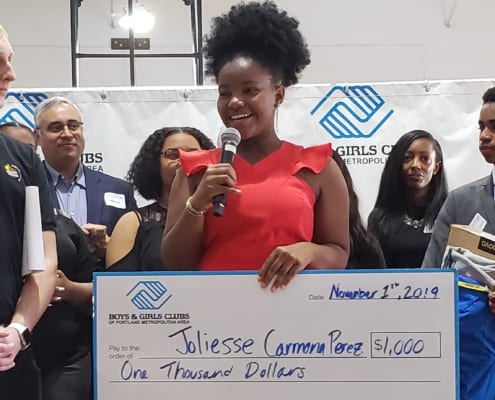 Three years later, as a teen member, she was named the Boys & Girls Clubs of Portland Metro’s 2020 Youth of the Year, winning a $1,000 scholarship and a laptop.

Throughout the years, she has fostered her leadership within the community. She was nominated and voted into the Multnomah County Youth Commission, serving on the Youth Against Violence Committee, received the Girl of the Game honorary award from the Portland Thorns, and started a student led leadership team, where older students help mentor lower-grade classrooms.

Striving to be an active voice in the community and advocate for others, Joliesse wants to be a politician. At the Boys & Girls Clubs of Portland Metro, we are able to empower her potential to change the world as she builds her Great Future.

R’jn Returns to the Court
Scroll to top