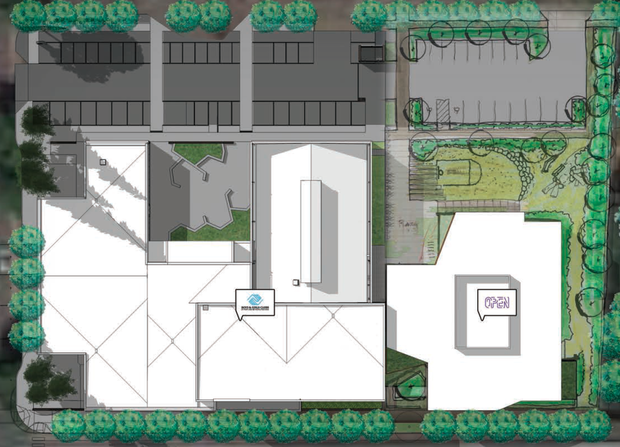 The Boys & Girls Club and Open Meadow plan to build new neighboring facilities in Rockwood. Construction is scheduled to wrap up next fall. (Holst Architecture/City of Gresham)

The new facilities will be built at the corner of Southeast 165th Avenue and Southeast Stark Street on the site of the former Drake’s 7 Dees garden center in Gresham. The campus will help bolster youth services for an underserved community struggling with crime and low school achievement, according to an April 20 news release.

The Boys & Girls Clubs plans to build a roughly 30,000-square-foot facility with learning and technology spaces, an arts room and separate program areas for younger children and teenagers.

The new Rockwood Boys & Girls Club would serve about 900 members, said spokeswoman Traci Rose. Daily attendance is estimated to be about 275 children.

The Boys & Girls Clubs will buy the roughly two acre parcel of land for $650,000. The organization has launched at $13.8 million campaign to pay for the project, and plans to save some construction funds by repurposing an existing retail space.

Open Meadow has already enrolled about 50 seventh grade students in the new program, said Executive Director Andrew Mason. The school plans to add grade each year for the next six, and will serve from 270 to 300 students, he said. The goal is to identify and support students who fall behind early on.

The new Open School is a partnership with the Centennial,Portland Public Schools,David Douglas, Gresham-Barlow, Parkrose and Reynolds district. Open Meadow has also partnered with the University of Portland to place student teachers in classrooms.

The Gresham Redevelopment Commission approved plans to sell the approximately one acre site to Open Meadow for $325,000. Mason said Open Meadow is raising $5.5 million for the project, which is estimated to cost about $10 million total.

Open Meadow plans to share the club’s industrial kitchen and gym facilities. Mason said he is excited about the project and that students will have after school support within walking distance.

“This partnership connects a world class education for historically under-served kids with the world class extended day and year supports they need,” he said in a statement.

Plans also include a community recreation field and a site for a potential early childhood partner. Check out proposed designs for the new buildings.

Construction on the new school and club is set to begin this fall and wrap up by fall of 2016.

Youth from SW Washington & Oregon come together in Portland for friendly...
Scroll to top