You are here: Home / East County / Weaving kindness into community 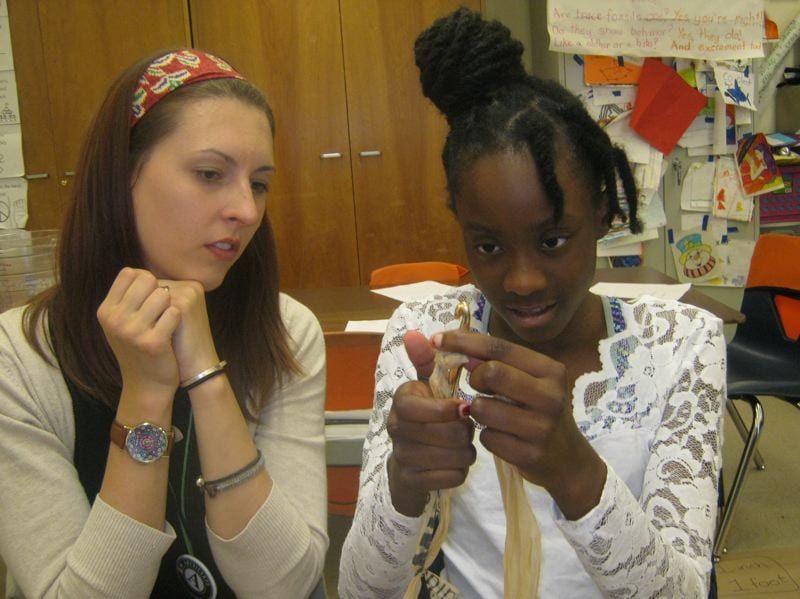 These students, in grades 1 through 5, have been meeting every Wednesday for an hour after school to turn 600 single-use plastic shopping bags into a 2.5-by-6-foot long sleeping mat for someone who’s homeless.

The class is offered through Scott’s SUN Community School, operated by Boys & Girls Clubs of Portland with funds from the Portland Children’s Levy.

It all started with a suggestion from a school speech therapist who thought making plarn sleeping mats might be a good project, says April Loschiavo, Scott’s SUN school coordinator.

Plarn is short for plastic yarn. It’s made by cutting single-use plastic bags into strips and looping those into strands that are crocheted together. The material is ideal for sleeping mats because the plastic repels bugs while creating a cushy surface that helps retain body heat, Loschiavo says. They are portable and easy to clean, making them perfect for people in homeless shelters, refugee camps or developing countries.

Loschiavo was intrigued by the suggestion, but worried Portland’s plastic bag ban would make it hard to collect enough bags.

In 2011, Portland city councilors banned grocery stores and other retailers from offering large plastic bags at checkout stands, and have since expanded the ban to include all retailers and food establishments.

Thousands of plastic bags from students, teachers and neighbors flooded the school.

“We still get bags, because the school is close to Portland’s border,” Loschiavo says.

Bags are still available in nearby Gresham, Troutdale, Fairview and Wood Village.

With a bag supply established, the nine-week class started after spring break. Students began by cutting bags into strips and looping them together to create strands they then made into balls of plarn.

The goal is to create two mats for Human Solution’s new family shelter just a few miles from the school. “But if we finish one, we’ll be happy,” Loschiavo says. They might even continue the class into summertime to finish the program.

Making plarn and turning it into a mat has proven time-consuming, even for 15 children working together. “Creating the plarn balls and then making the plarn is what takes so long,” Loschiavo says. Students didn’t start crocheting until mid-May.

Jordan Breasseale, an AmeriCorp member teaching the class as the school’s club liaison, says everyone is learning from the process.

“I’ve had to learn how to crochet myself,” she says, while teaching two students to maneuver a crochet hook around strands of plarn. “It took us all of last class to learn how to do a slip knot.”

Third-grader Quetzaly Alvaradò Bravin says she signed up for the class “because I think crocheting beds for homeless people is good for our community.”

Ghaira Motley, a fifth-grader crocheting across the table from her, agreed. “I knew people needed these mats, so I wanted to help out,” she says

Alvaradò Bravin paused to touch a row of completed stitches. “It’s kind of like a braid,” she says.

Letter from the CEO: Conquering Summer Learning Loss in Portland
Scroll to top